The concept for this  project was to create a family garden with structure, fluidity and form but would also have a strong sense of unity. It would be relatively easy to maintain and have plenty of seating areas for the summer months for dining outdoors and the sloping nature of the lawn would also be reduced.

After the old slabs were lifted and the ground dug and width extended to accommodate a 5m Indian sandstone circle patio the ground was hard cored and compacted. The sandstone circles were laid out on the lawn before being set in place on a mortar base. Patio areas taking shape before final grouting and the ‘happy worker’ observing his work. A brick edge around the patio helped to define the edge and also make a neat mowing edge with the lawn. Some of the soil dug out was used to build up the level of the lawn with imported topsoil totalling 7 tonnes also.String line was used as a guide to set the new level of the lawn with the patio at the house. In places the lawn were raised by about 160mm to reduce the decline in the garden. The boundary walls were painted magnolia in colour to take the greyness and coldness off the block and to create a subtle backdrop to show off the new plantings. Raised beds with a brick edge were used to create structured levels in the garden. 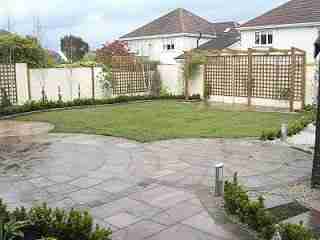 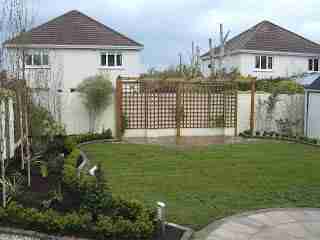 A space between the garden shed and patio was created to accommodate the wheelie bins which was screened using willow which became another feature in the garden. Donegal quartz gravel made the surface low in maintenance adding contrast and texture to the sandstone paving. When wet it gives off a pinkish hue which is quite nice indeed.

Japanese maple, hazel, bamboo and a large pleached laurel were planted to draw the eye upwards bringing height and contrast to the formal shape of the garden buildings.Garden Lighting was added strategically around the paving and pergola to bring another dimension to the garden in the evening and night time with up lights around the pergola and birch trees to cast silhouettes on the wall.Box hedging was planted to the edge of the borders which contained a mixture of herbaceous perennials, shrubs and multi and single stemmed silver birch trees. A pergola and trellis was used to create a feature at the end of the garden with the half moon patio and bring much needed structure to the garden.

Between the stepping stones to the shed we planted thyme which when walked on would release a beautiful scent when traversing to the work studio and storage shed. The studio was also rendered with white cement to give a crisp finish to the building. 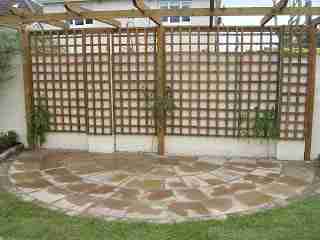 The bespoke pergola and trellis were created from pressure treated timber and stained with decking oil to give a nice finish to the wood. Wisteria was planted which would in time be trained to grow over the pergola creating cascading white blooms in mid summer and velvety pods in late summer and autumn.